Is blockchain the future of art? Four experts weigh in 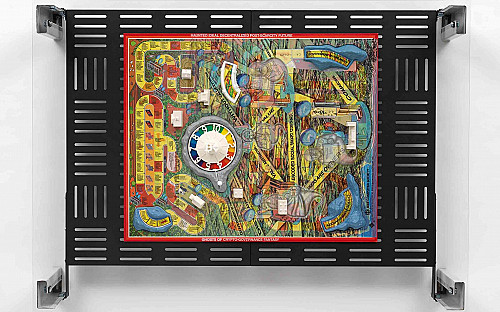 From verification tools for provenance and authenticity to new approaches to art collecting and even new art forms, blockchain’s impact on the artworld is already undeniable. During this year’s Art Basel Conversations in Basel, journalist Tim Schneider sat down with Simon Denny (artist), Robert Norton (founder and CEO at Verisart), and Kelani Nichole (founder of TRANSFER and director at The Current) to discuss the practical and creative outcomes – as well as the potential – of this nascent technology.

Blockchain can make the marketplace safer

One of the art market’s greatest challenges for works where the artist is no longer alive is to verify its authenticity and provenance. In a 2014 report, The Fine Arts Expert Institute (FAEI) in Geneva stated that over 50% of the artworks it had examined were either forged or not attributed to the correct artist. Blockchain could change this. As a public, decentralized list of records that are linked and secured using cryptography, blockchain’s key feature is its fragmented nature. Hosted by millions of computers simultaneously, no centralized version of the information exists for a hacker to access or corrupt. Thus blockchain is currently believed to be the most secure way to transfer digital data. ‘When it comes to selling artworks, two things are important,’ Verisart CEO Robert Norton said. ‘Is the artwork real, and do I have the authority to sell it to you?’ Blockchain’s capacity to track and verify authenticity through timestamps on transactions and cryptographic signatures can solve that problem.

Blockchain has become part of artists’ practice, both as subject and medium. There is a nascent blockchain art movement from bitcoin graffiti art to artworks such as The Last Bitcoin Supper by French artist Youl, which sold for nearly USD 3,000 on eBay in 2014. The likes of Simon Denny have examined blockchain and cryptocurrency as a subject for years. Other examples include Plantoids – blockchain-based robotic plants which interact with people who donate via Bitcoin and Ethereum – and CryptoKitties, a virtual game that allows players to purchase, collect, breed, and sell various types of virtual cats. During this year’s Codex Art Auction, exclusive editions were auctioned for up to USD 140,000, attracting a new class of collectors – one which is perhaps less attracted to more conventional forms of art.